The first charter school in Nevada — I Can Do Anything High School — is set to close this spring.

Ohio’s largest charter, with 12,000 online students, shut down last winter after a crackdown on its suspicious attendance figures. To help pay state fines, the school auctioned off everything from ballpoint pens to a singing Big Mouth Billy Bass wall plaque.

In New Jersey, the charter system is making real estate investors rich. They use federal money to build school buildings, then rent them to charter schools for a hefty profit. But the IRS has stepped in, reviewing the scheme. 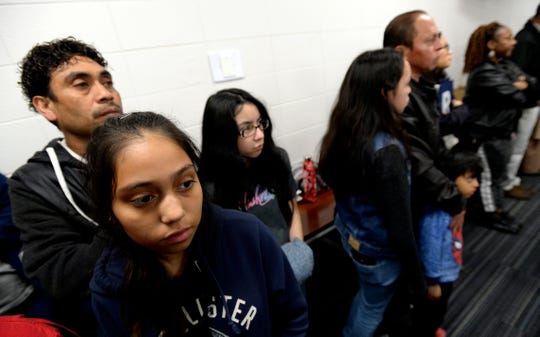 Parents and children listen during a meeting about the midyear closure of New Vision Academy charter school in Nashville, Tennessee. The school closed this month after a crackdown on fire code violations, financial irregularities and complaints about treatment of English-language learners and students with disabilities. (Photo: Mark Zaleski/ For the Tennessean)

Across the U.S., charter schools are facing a reckoning.

After new charters spread rapidly for a generation, with few rules or oversight in many states, the pace of growth is slowing. Politicians are calling for more regulation for the schools, which use taxpayer money but have private operators. The political winds have shifted as well, killing the kind of bipartisan agreements that allowed charter schools to blossom.

Start the day smarter: Get USA TODAY’s Daily Briefing in your inbox

Are charters on their way out, at least as we know them? That depends on who you ask.

When schools experiment, some will fail, said Education Secretary Betsy DeVos, a champion of charter schools.

“Charter schools are great options for thousands of students, and the demand for more of them remains very high,” DeVos said Tuesday during a congressional hearing. “We need more of them, not fewer.”

Rosa DeLauro, a Connecticut Democrat who chairs the House subcommittee where DeVos testified, shot back that DeVos’ office had been “asleep at the wheel” when it came to looking after how states oversaw their charter schools.

“It seems to me that charters have enormous flexibility, and there seems to be no one overseeing how that flexibility translates into federal dollars,” DeLauro said.

Outside of Washington, the rollback on charters is well underway.

The Los Angeles school board, the nation’s second-largest, has called for a statewide moratorium on new charter schools. In Minnesota — the first state to legalize charters, in 1991 — charter school enrollment is declining. In Nashville, Tennessee, the school board hasn’t approved a charter in two years, since anti-charter officials swept into office.

Just 355 new charter schools opened nationwide in the 2016-’17 school year, the fewest that had opened in a decade, according to the National Alliance for Public Charter Schools, an advocacy group.

To be sure, charters enroll a small proportion of the nation’s public-school students: just 6 percent.

But the schools have always received out-sized attention because they pledged to succeed where other schools had failed, particularly in urban centers. They were designed to foster innovation and to offer parents more options beyond traditional schools.

“Charters were horribly messianic in their narratives about how they were going to change the world and make it more equitable,” said Tim Knowles, former head of the Urban Education Institute at the University of Chicago. “In reality, some were great and some were about the same as regular public schools, and some were much worse.”

Charter schools are public schools that are privately managed, usually by nonprofit companies. The schools are given freedom from some state rules in exchange for meeting performance targets spelled out in their contract, or charter.

Many charters choose to operate longer school days and employ stricter rules around student behavior and academics than what traditional schools can legally enforce.

In a number of urban cities, charters have out-performed their public-school counterparts, research shows.

But in other cases, the schools have opened and then closed a couple of years later — or even in the middle of the academic year. Vulnerable students hop from school to school, losing the stability they so desperately need.

New rules and accountability measures seek to stop that instability. But the rules are stifling people who want to start new schools, some charter proponents say, thwarting the very innovation the schools were designed to foster.

“That’s contrary to the original idea of charter schools, which was to allow citizens or teachers or parents to solicit expertise or develop their own idea, and then we’d give them flexibility to pursue that idea,” said Jeanne Allen, executive director of the Center for Education Reform, a pro-charter group.

Todd Ziebarth, a senior vice president at the National Alliance for Public Charter Schools, noted that lawmakers in Ohio, Arizona and Texas have taken steps to close chronically underperforming charters.

“Many of those schools probably shouldn’t have been open to begin with,” he said.

In Arizona, politicians legalized charter schools without ever having set foot inside one.

That was 1994, and politicians were reeling from the outcry over low-performing public schools. Only two other states – Minnesota and California – had allowed the schools by then.

The untested plan was popular from the start, as applications for new charters flooded in. Immediately, though, some critics noted problems.

Schools, low on money for buildings, had to cook up other ways to raise money and find space. The “competitive” model politicians had envisioned meant a system where some schools were winners and some were losers: The first charter school to file for bankruptcy came in 1996.

Still, proposals to reform charters made little headway in a Legislature that shifted increasingly to Republican control.

Over the next two decades, charters grew to enroll about 16 percent of the state’s students and consumed 27 percent of the state’s education money. Some carved out a reputation for academic excellence. Basis Charter Schools, founded in Tucson, Arizona, routinely topped U.S. News and World Report’s rankings of America’s best schools.

But questions remained. Basis, for instance, supplemented low teacher pay with donations from parents, while the for-profit parent company pocketed millions of dollars from Arizona taxpayers.

The state’s Republican attorney general expressed outrage at some of the private payouts, declaring “I can’t believe it’s not a crime.”

Charter schools always had built-in opposition from public school teachers and their unions.

As part of their contracts, the independent schools receive freedom to hire their own staff. Most charter schools are not unionized.

This year, opposition from unions exploded in walkouts and strikes. Los Angeles teachers forced their district’s pro-charter school board to vote to oppose the expansion of charters. West Virginia teachers succeeded in derailing plans to open the state’s first charter schools. In Chicago, unionized teachers staged the nation’s first strike at a charter.

For most of a generation, a healthy percentage of Democrats backed the schools. Wall Street liberals invested in them, urban Democrats praised the options they afforded disadvantaged students, and former presidents Bill Clinton and Barack Obama supported them as avenues for school reform. Those Democrats formed coalitions with Republicans, who chafed at the bureaucracy of school districts and teacher unions.

As the country became more polarized, those coalitions dissolved. Liberals now say charters have held down teacher pay and siphoned taxpayer money away from traditional schools, hurting their students. Fuel for the left includes the pro-school-choice stances of President Donald Trump and DeVos.

“The unions could not have asked for a better gift in a president and (education) secretary to use as weapons against the charter school movement,” Ziebarth said. “They play into the caricatures.”

Even with momentum for the opposition, charters aren’t going away. They continue to expand in some parts of the country.

In New Orleans, virtually all public schools are now run by charter organizations. In El Paso, Texas, a push from business leaders is bringing a flood of charters in the next five years.

The federal government continues to give hundreds of millions of dollars to states to help them start new charters; last year’s winners included Arizona, Colorado, New York, Michigan and North Carolina. The 2020 budget request for the Department of Education calls for boosting federal money for charter schools by $60 million.

And in some states, calls for tightening rules on charter schools may wind up being more talk than action.

In Arizona, where tough questions had pushed even the most pro-charter politicians to support reforms, a Republican-sponsored bill this year suggested more oversight for how the schools spent public money.

It would have been the most significant reform to the state’s charter system in 25 years.

But moves to scrutinize private contracts were shut down. And the bill, after passing the state Senate, was singlehandedly killed by the House speaker.

Arizona’s laissez-faire charter system, it appeared, would avoid a crackdown yet again.