Google today took the wraps off its Stadia cloud gaming platform, showing off a bold but largely untested vision of the future of gaming that involves distributing and playing software in real-time over the internet. We still don’t know a lot about how Stadia will work, how much it might cost, whether it will operate as a Netflix-style subscription service for consumers or use a different business model, or when exactly it will come out later this year. But we did get our hands on the custom controller Google built, the only physical piece of the Stadia package.

Surprisingly, the Stadia controller feels and looks great. Granted, we didn’t get to try it on a live Stadia demo, but we did get to go hands-on with the same white and orange model that was used onstage during the reveal. It has a heft and texture similar to recent Xbox One gamepads — specifically the one that released with the Xbox One S redesign — but with the thumbstick layout of Sony’s DualShock 4. 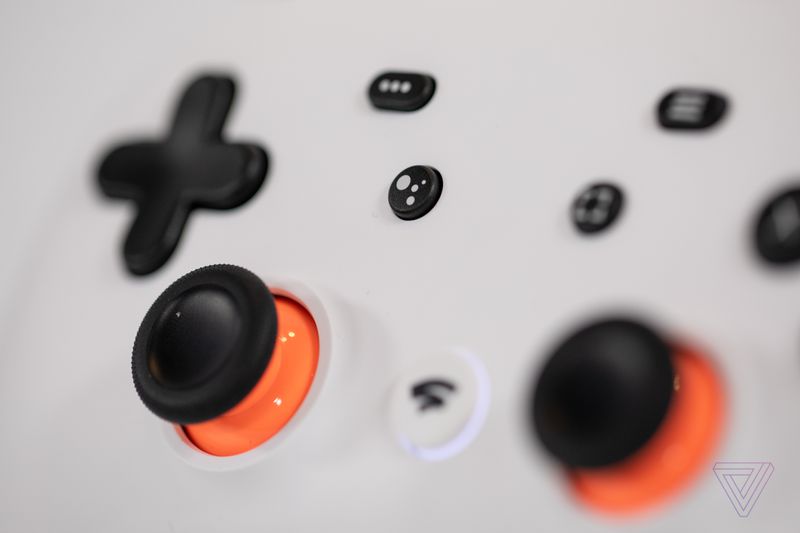 It features a USB-C port on top, a 3.5mm headphone jack on the bottom, and dedicated buttons to trigger Google Assistant-powered voice features and capture video of your gameplay. In a nice nod to gaming culture, images of the controller on Google’s website show it may have the Konami Code sequence as a barcode label on the bottom of the device, below the headphone jack. You can even type the requisite commands into the Stadia website to bring up a 3D model of the controller that you can inspect in your browser window. The controller we tried at GDC didn’t have the code on it, so it’s unclear whether the commercial version will feature it or if it’s just a fun Easter egg.

In one impressive demo shown onstage, Google showed off a feature that would let you use the Assistant button on the controller to pull a YouTube tutorial showing you how to overcome the specific hurdle or puzzle that’s giving you trouble in that exact moment in the game. The controller is also used to launch right into games that you may find on YouTube’s live streaming platform, so you can immediately start playing a title a favorite streamer of yours is playing at that moment.

According to Phil Harrison, former Sony and Xbox exec and current vice president at Google, the controller connects directly to Google’s data centers — rather than any specific screen you might be using — so you won’t need to re-sync it to, say, your laptop when you stop playing on the TV. In an interview with The Verge, Harrison says you’ll pair it with the Stadia network using a companion mobile app, which will connect the controller first to your local Wi-Fi network and from there to Google’s Stadia service.

We don’t know how much the controller will cost, or whether or it will come bundled with a Stadia plan. (Assuming there will be a subscription plan of some sort, which still isn’t clear.) But it doesn’t seem like Google skimped on this controller, which is a good sign for those who were worried it would be a cheaper, lower-quality gamepad compared with the devices that ship with Microsoft and Sony consoles.

And if you don’t want to use this controller, you won’t have to: According to Harrison, the service will support other gamepads, too. It sounds like the Google Assistant integration may be the only thing you’ll miss.